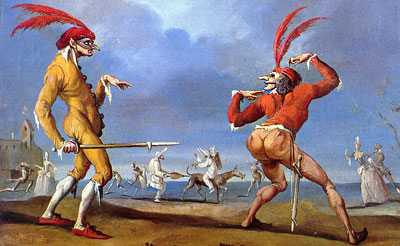 Starting from the work on three original, different types of masks that are basical for the developing of a performance of Commedia dell’Arte (Pantalone, Pulcinella and Arlecchino), the workshops pushs the work on the breathing, body and voice of the actors, on the difficulties of wearing a Mask and the best way to do It. Also, the workshop shows the difference between the characters and how to show It Just through the body and the masks: walking, standing, talking and acting Is totally different for each Mask; It works on the art of improvisation and how to build a performance without text and instruments, only using the body of the actors and the ability of adaptation and improvisation on the stage, as It happened in the original commedia dell’arte. It’s an important work on rithm and control of the stage and the audience, experiencing the possibilities of comic Theatre and it’s limits – the workshop offers Also a panoramical wiews of the historical period and situation in which this genre developed, in Italy.

In 2013 he worked with Università degli Studi di Napoli Federico II to realize the pièce “Europeans” and received the  laurea ad honorem from the “Centro Universitario Europeo per i Beni Culturali ( CUEBC )”.

In March 2016 the “International Academy of Music and performing arts” in Brno, Czech Republic, recognize Cristian Izzo as one of the most important artist working in Europe and decided to product his play “Pornocinella”, that made a tour for all the month of June 2016, in Czech Republic. In 2017 he had a workshop in Ramppikuume Festival (Finland) and he presented his theatrical research “the body, the space, the sound: the whole”  at SAMK (University of Applied Arts), he started to collaborate with Teautrul Skepsis (Romania) and he presented there his work “A God’s Rise and Fallen”, he had a workshop and performed  in Vratsa Festival (Bulgaria) and he had workshop and he perfomed “About the impossibility to say that Rosencrantz and Guildenstern are dead” at Espace Charles Trénet (Opera Theatre) for Shakespeare Festival (France).

In September he is also involved as actor as one of the protagonist of  “Quello che non sai di me”, a film by Rolando Colla.